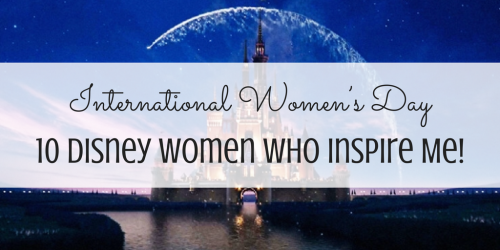 Today is International Women’s Day, a day that is really important to me, and in order to celebrate this day I’m going to talk about the Disney women who inspire me. Disney has always been the biggest part of my life and I was hugely inspired by Disney women whilst growing up and they continue to surprise me every day. There can often be bad press surrounding Disney princesses, but I think there’s much more to Disney women than we first realise. They’re pinnacle to so many films, whether they’re princesses, mums, animals, emotions, or anything in between. I’ve learnt many lessons, been inspired, and learnt to love myself, all from Disney women. This has turned out to be a really long blog post but I couldn’t resist celebrating International Women’s Day by highlighting my 10 inspirational Disney women!

Mulan has always been one of my favourite Disney films and Mulan has always been a badass woman to me. If posing as a man to save her father from war at old age isn’t enough, saving China certainly is. Mulan is constantly determined to prove herself to the men around her which results in this wonderful moment below. Her bravery results in her confronting The Hun and restoring her family’s honour. Mulan inspires me because she challenges the stereotypes of women and proves she is just as capable as men.

I love the inclusion of Honey Lemon and GoGo Tomago in Hiro’s superhero gang. In case you don’t know, Big Hero 6 has a STEM based focus, with some scenes revolving around a tech college where the students make incredible scientific advances. These two are representing women in science and technology, showing us that we can do anything we want to. They’re also a great support system for Hiro when he feels like he has no one to turn to. Your rock, girls!

Merida is easily my favourite Disney princess in regards to character and personality. I still remember how excited I was to watch Pixar’s first princess in the cinema, with the added bonus that she was ginger like me! My love for her grew enormously when Merida became the leader of her own life, refusing to have an arranged marriage and continuing her love for archery and everything ‘not for girls’ (as her mother would say). Merida proves to us that we can enjoy sports, be adventurous, and be acceptably single – because we don’t always need boys!

Kala is a strong woman who loves all her children, whether they’re blood related or adopted. I love her devotion to Tarzan, despite their clear differences. She raises him like her own, teaches him their ways, and makes him feel at home. Kala also stands up to Kerchak when he believes Tarzan is threatening their colony, which is incredibly brave. I inspire to be like Kala if I’m ever a parent.

Despite her code being encrypted and her true identity being erased from the game, Vanellope constantly tries to make friends and  join the game with the other racers. When she meets Ralph she isn’t afraid of his bad-guy appearance and they soon become allies. She knows she deserves to race and unlock her true identity so she stops at nothing to prove herself.

Belle – Beauty and the Beast

Belle is Disney’s most famous book worm, showing us that it’s okay to bury your nose in a book (even if it may be considered slightly odd by the villagers). She isn’t deterred by their whispers and instead continues to educate herself. Of course we can’t ignore her love and determination when it comes to the Beast. After sacrificing herself to free her father she accepts her fate and grows to love it, saving the most lost heart of all.

Tarzan is one of my favourite films and I think Jane has a lot to do about that. She’s a bright English girl who’s accompanied her dad on a trip to study apes and finds herself connecting to Tarzan, an ape-man. She doesn’t let his differences deter her and instead works to find alternative ways to communicate with Tarzan. Jane proves that we can make friendships with people from all walks of life if we learn to understand each other. I think Jane is a brave and wonderful Disney woman.

Moana is Disney’s most recent princess, a Polynesian voyager who finds herself despite being held back by her parents. I love her strong-willed personality (or stubborness!) and adventurous nature that helps her, track down Maui, restore the heart of Te Fiti, and rediscover the life her people used to love. Moana is one of my favourite inspirational women. As the chief-to-be she is constantly making difficult decisions that impact the lives of her people. Most importantly, I love that she ignores her given position in order to find herself. Moana inspires me to embrace adventure and to find myself along the way.

Sadness & Joy – Inside Out

Not only are Sadness and Joy two of my favourite Disney characters, their journey to save Riley and ultimately understand each other makes me so emotional. There is nothing more important to me, as someone who suffers with their mental health, than understanding my emotions. Sadness and Joy teach me that it’s okay to be happy, sad, and a bit of both. They exist together and should all be embraced. These fictional portrayals of emotions inspire me every day.

Nani has and always will be my most inspirational Disney woman. After her parents die she takes Lilo under her wing, becoming her guardian. It’s not an easy job and it really tests Nani but she tries her hardest to keep a job in order to provide for a little sister. She even ignores David, who she clearly really likes, in order to be free of distractions so she can give all her time to Lilo and their home. Nani inspires me every day in the way she acts with Lilo and the things she does to please her (like buying Stitch) , her willingness to work in order to provide, and her love . She may have comic arguments at Lilo but they both know how much they love each other. Nani inspires me as a parent, sister, and friend.

I have had the best time talking about my favourite inspirational Disney women on International Women’s Day. I’m so thankful for Disney and their badass females that have taught me to be myself and stand up for what I believe in. I’m glad to have such wonderful role models on this day that celebrates women.

18 thoughts on “International Women’s Day: 10 Disney Women Who Inspire Me!”